Gift With Purchase in Store

Yesterday, for the second year in a row, rather than attend the White House Correspondents Dinner, the current president held a counter-rally, pandering to his "base" instead of honoring the 1st Amendment Freedom of the Press & Free Speech that we all enjoy. At this rally, the misinformed crowd began chanting "Nobel, Nobel, Nobel," implying that the #ApprenticePresident deserves the Nobel Peace Prize for the possible demilitarization of North Korea's nuclear weapons campaign,

She Persisted Around the World

The guest list for yesterday's Memorial Service for former 1st Lady Barbara Bush read like a Who's Who of American Presidential royalty, Including President & First Lady Bill & Hillary Clinton and 1st Daughter Chelsea Clinton. Chelsea Clinton was recently in town for a Book Signing Event at Blue Willow Bookstore in support of her new Children's Book, "She Persisted Around the World." While I was unable to get a ticket to the event, I did manage to reserve a signed copy of the 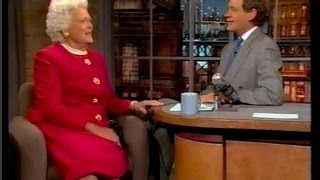 Wife of one & Mother of another US President, Barbara Bush brought dignity to the White House with humor & grace. It has been said that she retained her good-natured sense of humor all the way to the end. If she's anything like my mom, I know she would want her family, friends & loved ones to remember the good times. That's how we handled the death of my mother - with her, reminiscing about the good times with humor & grace. Mom also had a self-depricating sense of humor - w

Come In & Learn Why Women Ought to Vote

Come In & Learn Why Women Ought to Vote," a pictorial history book for Elementary-age school girls came about in honor of Women's History Month. Barbara Bush was a champion of both Literacy & Equal Rights for Women. Now, I honor her by encouraging little girls & young women to study Civics, Political Science & Equal Rights with a FREE Gift with Purchase in the Revolving Door HR Store. Now through April 30th, Buy "Yes I'd Like to Thank the Academy: How to Tame the Red Carpe

Death knows no Political Party or Gender or Race or Ethnicity. Barbara Bush is being prepared for burial at the George Bush Presidential Library in College Station by the Funeral Directors George H. Lewis & Sons directly across the street from where I live. Getting out the door each day this week has been interesting to say the least with a police presence of HPD, Secret Service & every Media Outlet in town parked across the street. The minor inconvenience for these three da

With the News that Barbara Bush is in Comfort Care in Home Hospice, I thought this would be a good time to re-visit the Philosophy of world Funerary Customs beginning here. This is not a Palace. This is a Mausoleum built in celebration of the Life that was lived. https://en.wikipedia.org/wiki/Taj_Mahal As a Life & Health Insurance Agent who began my Insurance Career in Life Insurance, what I have found is that there is a time for caring at every stage of the life cycle, inc

Fitness for Office. The 25th Amendment

The Office of the Presidency of the United States of America is the face of our country to the world. Citizens of this country should NOT be mortified by the Bullying, dishonest womanizing behavior of a person who cannot be trusted. Insurance Agents are REQUIRED to take MANDATORY training in ETHICS once every two years. Ethics training includes things like Deceptive Trade Practices & Material Misrepresentation (a fancy legalese term for Lying.) In my opinion, ALL POLITICIAN

30 Days of Discrimination Towards WOMEN

L.I.S. Medicare Low Income Subsidy. ObamaCARE Did the Same for the Rest of Us

She Persisted Around the World. 13 Women Who Changed History

The Disgrace of June 2022. Publish the Equal Rights Amendment for ALL of Women's Rights

Words MATTER. Give Us a Hate Speech Bill & Publish the Equal Rights Amendment

Give Mom the Gift of Equality. Ratify the ERA

May the 4th Be With Mom. Publish the ERA

The Equal Rights Amendment will SAVE Abortion Rights. PUBLISH ERA